Professor of Biology and Medical Technology

Better understanding of the relationship between the health and wealth of nations could improve the cost-effectiveness of humanitarian assistance and foster fulfillment of the Millennium Development Goals. Initially, health was considered an effect of wealth (1). Currently, however, the relationship is viewed as a positive feedback loop: Wealth enhances health, which then enhances wealth (2). While the merit in the current perspective is obvious, the definitions of national health and wealth leave something to be desired.

In an effort to measure each nation’s overall welfare, the United Nations Development Programme invented the Human Development Index (HDI), an aggregate of per capita health, wealth, and education statistics (3). While the HDI is a reasonable measure of a nation’s per capita welfare, per capita perspectives can mislead, for large nations with better per capita statistics than small ones can harbor more poor or sick people. When we want to compare nations, we cannot ignore the size of their populations. Needy people in rich nations are no less important than equally needy people in poor ones.

Aggregating health, wealth, and education data can also mislead, for health and wealth can vary oppositely. Wealth that is pursued by socially or environmentally destructive means is inherently unhealthy, while health that is pursued without fiscal responsibility, is economically destructive. And education that fosters destructive pursuits of health or wealth stifles both. A single aggregate of per capita health, wealth, and education data, therefore, is not the ideal measure by which to rank nations according to need or abundance.

The focus on per capita statistics might be one reason for sluggishness in pursuit of the Millennium Development Goals. There’s no consensus on the nations in greatest need. Is Brazil needy? Is Mexico or India? Which nation is most needy? Which is second, third, etc.? International triage requires that nations be ranked according to need or abundance by some objective criteria. But the only accepted criteria are per capita statistics.

It has been common to interpret a nation’s life expectancy at birth (LE) as a measure of national health, and a nation’s gross national income per capita (GNI/c) as a measure of national wealth. But no specific values for either parameter have been identified as distinguishing healthy from sick, or rich from poor nations, respectively. In this paper, I expand the definitions of national health and wealth, and objectively identify the specific values that distinguish healthy from sick nations. I identify the minimum values of wealth associated with national health and offer these values as international poverty lines. Nations are poor in proportion as they fall below these lines, and rich in proportion as they exceed them. Fair humanitarian assistance, perhaps, ideally, as World Tax, would flow from rich nations in proportion to their excess to poor nations in proportion to their need.

For some clinical tests, it is possible to distinguish patients from normal subjects by plotting the clinical test results vs their percentile rank in the population (5). With colleagues, I quantified and simplified this method and demonstrated its utility in distinguishing normal from abnormal values without subjective assumptions (6-7). It is an ideal method for distinguishing normal from abnormal nations, and I have applied it to the nations under study.

In the final analysis of the 144 nations studied, 87 (including Algeria) are normal by all five criteria and considered healthy, 47 are abnormal by all five criteria, 2 by four criteria, 2 by three criteria, and 6 by one criterion. Except for Algeria, nations with abnormal values are considered sick. Some or all of the 6 nations sick by only one criterion might be false positive errors, i.e., they might, in fact, be healthy.

To assess wealth, I plotted MMR vs total health expenditure per capita (Health $/c) (Fig. 2). Health expenditure data is in purchasing power parity in international dollars for 2008 as listed in Table 7 of reference 4. To clarify the difference between healthy and sick nations in Fig. 2, I focused only those 54 nations that were very poor, i.e., reporting Health $/c < 200 and those 32 nations that were very rich, i.e., reporting Health $/c greater than 1500 (Fig. 2). This focus makes the difference between rich (horizontal line) and poor (vertical line) conspicuous. Some of the 58 nations with Health $/c between 200 and 1500 fall on neither line (Fig. 2). This proves that the relationship between MMR and health expenditure is not a simple dichotomy. But the discrepant points are uncommon and not far from one or the other line. The simple dichotomy, therefore, is a reasonable first-approximation of the relationship between health and wealth. For the vertical line, the slope is -3.47 and the intercept 764. For the horizontal line, the slope is .0005 and the intercept 8. The lines intersect at Health $/c = 218. This is one measure of the minimum health expenditure for a nation to be rich. It approximates a more relevant parameter, i.e., the minimum health expenditure for a nation to be healthy. This is estimated by solving the equation of the vertical line for Health $/c at the critical MMR = 119.5. This value is 186.

Of the 87 healthy nations, only 5 (Cape Verde, Fiji, Mongolia, Philippines, and Syria) have Health $/c < 186. Of the 57 sick nations, only 10 (Bhutan, Bolivia, Botswana, Ecuador, Equatorial Guinea, Gabon, Kazakhstan, Namibia, South Africa, and Swaziland) have Health $/c > 186. Except for these 15 outliers, the 144 nations break into a natural dichotomy of 82 rich and healthy nations and 47 poor and sick nations. Of the sick outliers, Ecuador and Kazakhstan are each sick by only one criterion and might, in fact, be healthy. As a predictor of national sickness, Health $/c < 186 is at least 82% sensitive (positive in sick nations) and 94% specific (negative in healthy nations). I suggest that nations with Health $/c > 186 are rich enough to be healthy.

Cape Verde, Fiji, Mongolia, Philippines, and Syria manage to be healthy at lower health expenditure. They are the champions of cost-effectiveness, and their health budgets might be models to emulate. How do they achieve health with sub-par health expenditures? The answer is unknown. But all 5 of these nations report values for LE loss < 19, i.e., they are egalitarian. There is strong evidence that egalitarianism fosters health (8-9).

At the other extreme, Bhutan, Bolivia, Botswana, Ecuador, Equatorial Guinea, Gabon, Kazakhstan, Namibia, South Africa, and Swaziland fail to achieve health at high health expenditure. They are models of inefficiency. Why do they fail to achieve health in spite of substantial health expenditures? The answer is unknown, but all 10 of these nations report values for LE loss > 20. They are non-egalitarian.

The Need of Nations

On the suggestion that health expenditure per capita of $186 is the minimum necessary for health, a poor nation’s per capita need for health spending can be estimated as the difference between $186 and that nation’s Health $/c. A nation’s total need is the product of its per capita need and its population. Each nation’s total population for 2009 (in thousands) is listed in Table 9 of reference 4. The 47 poor, sick nations are listed according to need in Table 1. The total need for Health $ of all 47 needy nations is $231 billion.

To provide health expenditure, a nation needs income. The graph of Health $/c, on the vertical axis, vs gross national income per capita (GNI/c), on the horizontal, is linear over all nations studied, with slope = .098, intercept = -205, and Pearson correlation coefficient, r, = .948. Values for GNI/c in purchasing power parity in international dollars for 2009 are listed in Table 9 of reference 4. While nations can convert income into health expenditure without limit, their ability to convert health expenditure into health reaches saturation at Health $/c near 500 (Fig. 2).

I suggest that Health $/c is the effect of GNI/c. We can find the minimum GNI/c necessary for health by solving the above equation for Health $/c = 186. This value is $3990. A poor nation’s per capita need for income can then be estimated as the difference between $3990 and its GNI/c. A nation’s total need is the product of its per capita need and its population. The 47 poor, sick nations are listed according to need for income in Table 1. The total need for GNI of all needy nations is $3495 billion.

The Excess of Nations

By the above reasoning, a rich nation’s health expenditure per capita in excess of what it needs for health is the difference between that nation’s Health $/c and $186. A nation’s total excess is the product of its per capita excess and its population. The 87 rich, healthy nations are ranked according to excess in Table 2. The total excess health expenditure of all rich, healthy nations is $5009 billion.

How should we judge the overall welfare of nations? The HDI is a convenient per capita statistic and correlates well with per capita health and wealth statistics, but does not correlate well with national population or with the above measures of national need or excess (Table 3). The Pearson correlation coefficient, r, between the two measures of need, Health $ and GNI, is .94 over all 45 nations that are needy for both. Both measures of national need also correlate very strongly with national population: Need for Health $ vs population, r = .97 over the 47 nations in need of Health $; Need for GNI vs population, r = .92 over the 45 nations in need of GNI. Turkmenistan and Angola need Health $ but not GNI.

The Cost of Health for All

The final Millennium Development Goal calls for a global partnership. A fair basis for such a partnership would include an international business plan to move 7.5% from each rich, healthy nation’s excess GNI as listed in Table 2 into each poor, sick nation according to need as listed in Table 1. This might be in the form of contracts to buy health and ecology. Rich nations might pay poor nations to hire their people to build health and preserve their environments. Rich nations might look to the champions of cost-effectiveness, Cape Verde, Fiji, Mongolia, Philippines, and Syria, and also to the expert translators of income into health expenditure, Honduras, Moldova, Nicaragua, and Viet Nam for strategic guidance.

Brazil and Mexico are commonly considered poor, but both rank among the nations with greatest abundance (Table 2). It is more accurate to consider Brazil and Mexico to be rich nations that harbor large populations of poor, sick people because rich Brazilians and rich Mexicans hoard wealth. The income GINI coefficient, a measure of a nation’s economic disparity, is 52.9 for Brazil and 51.7 for Mexico, as listed in Table 3 of reference 3. By comparison, the USA, with the world’s greatest excess and a reputation for economic disparity, has a GINI of “only” 40.8.

Dissecting the Relationship Between Wealth and Health

Money, at least in the form of health expenditure, can be viewed as a nutrient, and nations can suffer from excess (financial obesity) as well as deficiency (Kwasiorkor). Most healthy nations are suffering from financial, and, in many cases, also nutritional, obesity. If wealth is a necessary condition for health, 44 nations have less of it than they need. Rich nations would get more health for their dollars, and less obesity, if they donated them to such needy nations.

How will we know when we’ve achieved health for all? We will have delivered “the most appropriate interventions for the most common health problems in the communities in greatest need” (10). As a result, the value vs percentile plots of health statistics will loose the break they now possess (Fig. 1). All nations will be on the same slope. How can we get that result? By practicing international triage, ie., by calculating each nation’s need for income if needy, or excess income if wealthy. With that information, we can solicit from each rich nation according to its excess in order to give to each poor nation according to its need, and, in this way, achieve health and wealth for all.

The author is grateful for advice and criticism from Patricia Cohen, Ph.D. 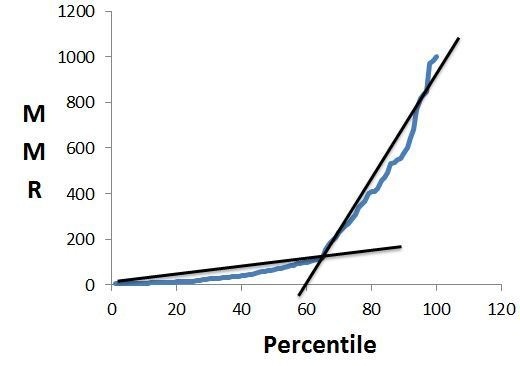 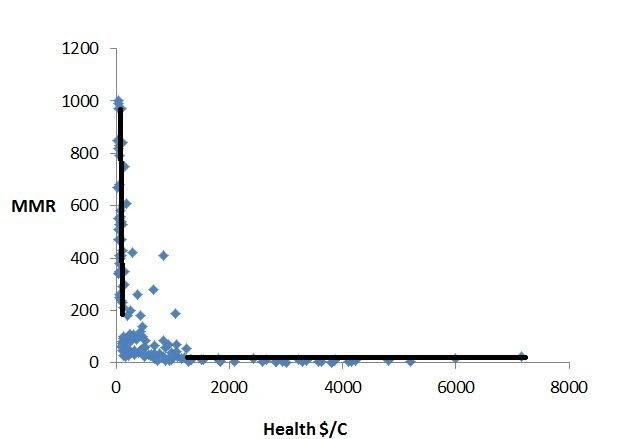